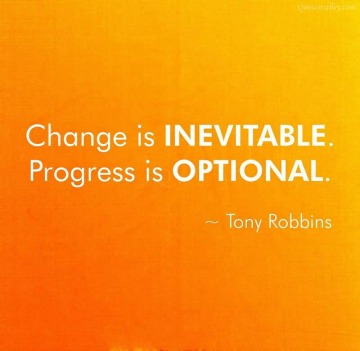 As fall approaches we begin to see the transition between the seasons with the days getting shorter and the evenings getting cooler. It reminds me of the parallels between the regular changing of the seasons and the changes that regularly take place in our lives. In fact, as I think back on it, nearly all of the major transitions that have taken place in my life (job or career changes, the birth of my children, meeting my wife, buying my homes) have all, for some reason, taken place in the Fall.

The transition between summer and fall seems to be more dramatic than the others. We move from a time of warm weather and increased leisure activities, to a time when we seem to realize that it’s time to dig in a little and get back to business. So it’s no wonder that at this time of year, my mind always tends to shift toward change. Maybe it goes all the way back to the beginning of the school year, but it seems that, when September rolls around my mind inevitably turns toward how things can be different.

Change is an interesting concept. There have been reams written on the “process” of change. How to become more comfortable with it? How to learn to accept it? How to get into the right mindset to embrace it? It’s not always easy, which is why so much is written about it. But I think that one of the most significant reasons people often resist change is because it can make people feel a loss of control. The process of change can feel like a large ship; once it gets going, it’s difficult to stop, and shifting course can take considerable time and effort.

The truth is that we often have more control over the change in our lives than we realize. Not only can we make choices to alter changes that occur as a matter of circumstance, but we also have the power to initiate it in the first place. The key is to establish and practice mindfulness in times of change. To think of it more like a moving car than a ship and to realize that we are not merely passengers on a ride, but rather we have the ability to step into the drivers seat and gain access to the steering wheel and brakes. Gaining that mindfulness, which is nothing more than the ability to pause and think about what your thinking about, helps us regain the control we need to embrace change, and to see it as opportunity.

That’s not to say that the process of gaining control over change, and finding ways to embrace it is easy. Sometimes you really have to work hard to climb over into that driver’s seat, because the change may not slow down enough to open the door and casually walk over to the other side. But, in my experience at least, it has practically always been worth the effort because, once I’ve taken control, I can think of almost no instances where the change didn’t lead me to a better place than where I started. And that’s true whether I initiated it, or I grabbed control once we were already rolling.

So there’s no denying that change in our lives, like the change in seasons, is inevitable. But if we can be mindful enough to recognize it, seize it, and learn to EMBRACE it… either on our own or with the help of others, we can begin to view it as an opportunity. To create something that takes us to a better place. Rather than as a trip with an uncertain destination that is thrust upon us.

Brett is a Certified ADHD Coach and has been helping individuals create change in their life and discover their strengths since 2013. Diagnosed with ADHD himself at age 43 he has learned to minimize his challenges as an adult with ADHD and how to maximize the gifts that come with this disorder (or ‘difference’) as he now likes to call it.
Alignment & ADHD
ADHD Challenges, ADHD Insight, ADHD Management Strategy, ADHD Strategies, Executive Function, Mindset, Self-Awareness